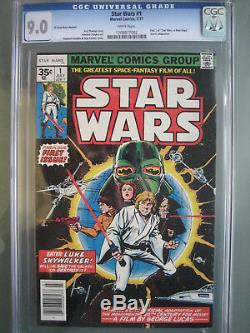 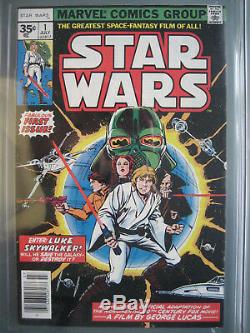 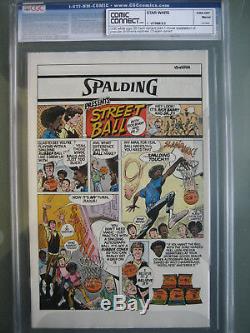 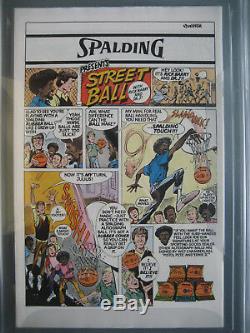 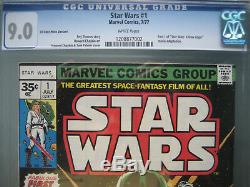 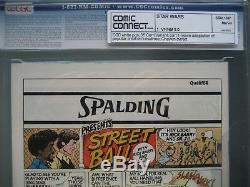 Part 1 "Star Wars: A New Hope". Roy Thomas (Story) Howard Chaykin (Art & Cover) Tom Palmer (Cover). Holy Grail of Star Wars Comics! Sure, it's the movie that changed cinema, but it was also the comic that saved Marvel, kinda. When Marvel bigwig and comics legend Roy Thomas got a sneak work-in-progress screening of the risky, widely derided space oater in early 1977, he cannily browbeat a skeptical Stan Lee into snagging the comics rights to the future mega-franchise.

It didn't take much to convince filmmaker George Lucas, as the notorious fanboy was a long-time Marvel maniac and knew that the House of Ideas was the only logical home for his daring new project. After months of furious work on the part of Thomas and artist Howard Chaykin, the first issue hit stands in advance of the film's premiere, making it a novelty amongst Star Wars tie-ins. Of note are the off-model portraits and color choices littering these early issues, as Chaykin and company had only stills and workprints off of which to craft the book, leading to a surprisingly beefy Luke, a zaftig Leia, and... Forget all that, it's Star Wars, the most significant pop-cultural creation of the past 40 years, and you love it, you know you do. Star Wars #1 35 Cent Newsstand Price Variant. Star Wars #1 was released in 1977 (just before the movie) and is part one of the movie adaptation of Star Wars IV: A New Hope. At this time Marvel was experimenting with a 5 cent price increase, with 35 cent copies of many comics available but only in a select few cities. There is some evidence to suggest (distribution markings on the comics) that the 35 cent newsstand variant of Star Wars #1 was distributed to four cities (Memphis, Toledo, Tuscaloosa and Wilmington) so are thought to be very rare indeed, with Overstreet suggesting only around 1,500 copies were printed. The rare first print newsstand 35 cent price variant has a square price box, has "July" underneath the issue number and also has a barcode in the UPC box.

There are other 35 cent variants and these are later reprints and should not be confused: they can be easily identified by the diamond price box and the lack of a barcode (one also has "reprint" printed next to the top left staple). These reprints are not particularly valuable in comparison with the much rarer 35 cent newsstand variant. As well as buyers needing to be aware of the various reprints, forgeries of the 1st print 35 cent variant are also known to exist; at least one is thought to have been created from a standard 30 cent variant, with the price box being doctored, however, this was spotted as various aspects of the price box simply didn't line up with a true copy. There is some speculation that less than a third of the 1,500 estimated print run for the 35c newsstand variant is thought to have survived to this day, they are certainly rare and, in April 2018, only 212 graded recordings in the CGC census, with two 9.6 copies the highest recorded gradings so far (this compares to 7,199 graded recordings for the regular 30 cent copy, with 484 recorded in 9.8).