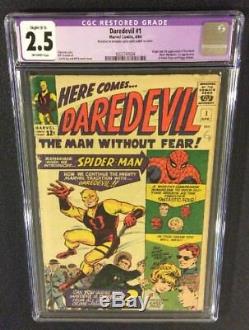 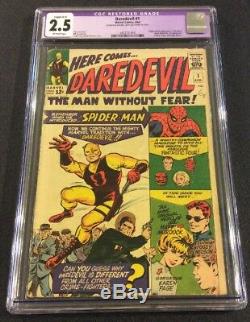 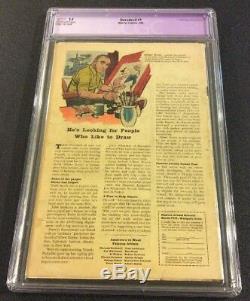 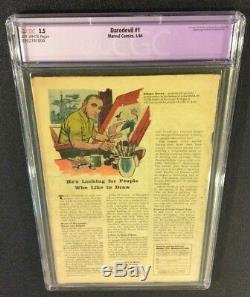 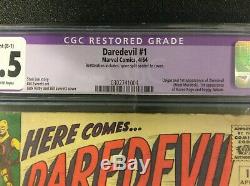 Book features the Origin & First Appearance of. COMIC HAS A CGC RESTORED GRADE 2.5. Restoration Includes: spine split sealed to cover. This Silver Age Comic was published by Marvel Comics in 1964. Photos are of actual book.

PRICE IS FIRM - OFFERS NOT ACCEPTED. Cover pencils by Jack Kirby, inks by Bill Everett. First appearances of Daredevil, Karen Page, and Foggy Nelson in The Origin of Daredevil, script by Stan Lee, art by Bill Everett (splash page penciled by Jack Kirby). Matt Murdock saves a blind man from an oncoming truck but is struck blind himself by a radioactive canister during the rescue; The radioactivity heightens Matt's other senses and gives him an uncanny radar sense; Matt graduates college and begins practicing law with his college roommate Foggy; Matt's father, a boxer, is killed by the Fixer after he refuses to throw a fight; Matt designs a costume and a billy club (from his cane) and takes his derogatory childhood nickname "Daredevil"; DD tracks down the Fixer and the man who shot his father.

Spider-Man and Fantastic Four appear on the cover but not in the story inside. See our other Listings for more CGC Graded Books! The item "DAREDEVIL #1 Comic CGC 2.5 ORIGIN 1ST APPEARANCE MATT MURDOCK Marvel 1964 Foggy" is in sale since Wednesday, October 18, 2017. This item is in the category "Collectibles\Comics\Silver Age (1956-69)\Superhero\Daredevil".